We have found severe maladministration for Clarion’s significant failings in dealing with a complaint from a resident with vulnerabilities, and are planning to conduct a wider investigation. 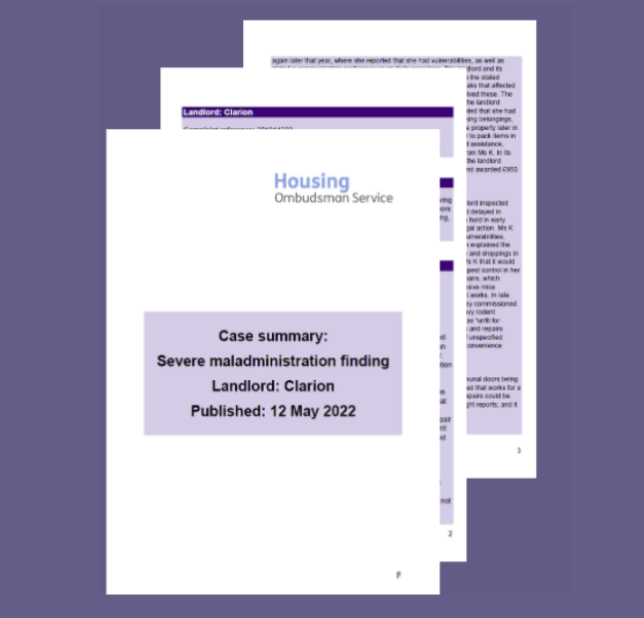 We have found severe maladministration for Clarion’s significant failings in dealing with a complaint from a resident with vulnerabilities. The landlord’s responses did not sufficiently acknowledge all the issues raised by the resident in her complaint or the reasons for delays she experienced over 15 months. It failed to engage with the resident and the Ombudsman and by not acknowledging its failures for some time caused additional distress and frustration for the resident.

Our investigation found there were extensive delays in resolving water issues and leaks and repairs. There were instances where the resident lacked hot or cold water for days and months at a time, and there were overall delays of more than 15 months in dealing with a number of necessary repairs that were known to the landlord following reports of leaks in the resident’s home and outside her door, damp and mould and rodent issues. While there were extensive delays, the landlord did take some steps to acknowledge and offer suitable compensation for its failings.

We found service failure for the landlord’s response to a rodent infestation which clearly led to some distress to the resident, who reported mice in almost every room at one point. Delay in carrying out works and missed opportunities in assessing the issue contributed to the ongoing lack of resolution. The landlord apologised and offered compensation for the delay and the impact on the resident but there were unacknowledged failings in its response.

During the course of the complaint there were issues with complaint handling, communication and consideration of the resident’s vulnerabilities. The resident reported her vulnerabilities but there is no evidence the landlord took steps to review and make further enquiries about these, to consider any additional needs or appropriate variations in service delivery. She asked to be emailed rather than called on multiple occasions, which was largely disregarded for a period of five months. We made a finding of severe maladministration as the landlord’s responses to the resident’s complaint did not go far enough to acknowledge specific issues and reasons for the delays she experienced across the full 15 months of her complaint, and the cumulative impact.

In regard to the issues raised around damp and mould and pest infestation, the Ombudsman intends to conduct a further investigation using its systemic powers under paragraph 50 of its Scheme to identify areas for the landlord to learn and improve.

Richard Blakeway, Housing Ombudsman, said: “Our investigation recognises the complexity and challenges of the case. However, it also highlights that had the landlord not made reasonable offers of redress for the delays resolving water issues and leaks and repairs, its actions would have amounted to multiple findings of severe maladministration. We are dealing with other cases about similar issues which may be indicative of repeated failure which is why we will be carrying out a further investigation.

On the severe maladministration case

“This was a complex and challenging case, which has concluded with the resident moving to a new Clarion home. We are disappointed by the judgement made by the ombudsman, as we don’t believe it reflects all of the support that our colleagues provided. This is particularly the case regarding the resident’s vulnerabilities; we have provided evidence that when alerted to these, they were taken into account.

We fully accept that we were too slow to act in the early stages of this case, have apologised for this and conducted a full internal review into what went wrong. However, a number of issues were exacerbated by the resident refusing to grant Clarion staff access to the property over a period of time. Housing associations do not have the same power as private and local authority landlords to access homes and we’d like to see this changed, so the problem does not recur in the future.

As an organisation, Clarion is determined to learn from every case. We will continue to work closely with the ombudsman and are reviewing our approach to pest control and how to account for specific vulnerabilities among our residents.”

On the wider investigation into Clarion by the ombudsman

“Clarion’s processes have changed substantially since the case published today by the ombudsman was resolved. We have provided extensive information to the ombudsman regarding the progress we have made on pest control, specific vulnerabilities and tackling damp and mould in the homes of our residents.

We are disappointed by the public comments about a ‘wider investigation’ today and will be writing privately to the ombudsman on these issues. Most importantly, Clarion is determined to continue to drive improvements in the service we provide all our residents.”